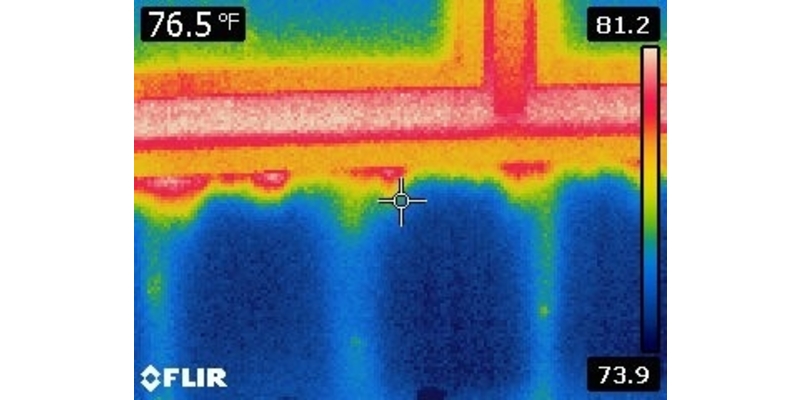 On July 28-29, 2016 Heery Engineering visited the Joseph P Addabbo Social Security Building in Jamaica, New York to perform an infrared camera* survey of the building exterior assemblies.  Architects, engineers, and commissioning agents use the images to diagnose the quality of system and equipment installations and their ongoing performance years out.  The infrared survey served to preliminarily evaluate the air, water, and thermal barrier performances of the different building envelope systems.

The figure below show the infrared and visual images of a wall construction near a window.  The stud bays are clearly discernible and if one looks closely, even the nails in that secure the drywall to the studs are discernable as green pinpoint.  To be clear, the infrared camera does not ‘see through’ the dry wall surface, but sees the temperature of the surface.  Because the studs are more thermally conductive that the insulation between them, more heat is transferred to the drywall in contact with the studs (a.k.a. thermal bridging, which reduces insulation performance by about 50%) and therefore higher surface temperatures.  A deficiency in the wall assembly is readily observable, one of the stud bays to the left has appreciably higher surface temperatures.  Either the insulation has been not installed or has been compromised in some manner by either being compressed or wetted.  Compressed insulation has reduced effectiveness due to smaller air pockets to insulate with.  Wetted insulation shrinks when dry and effectively acts as compressed insulation or worse. Any remaining/recurring wetness conducts heat around the insulating material. 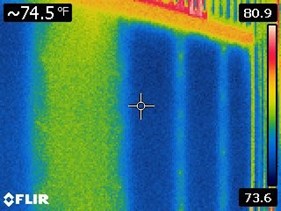 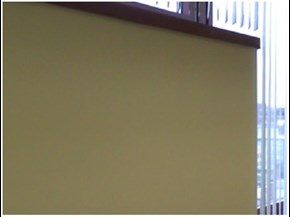 In this figure below, ‘fingers’ of higher temperatures are detectable around the window sill.  A closer look showed that the caulk had deteriorated to the point of open gaps (themselves not pictured).  Here heat builds up within the minimally insulated window frame and ‘breathes’ heat into the space, costing additional energy to heat and cool the office. 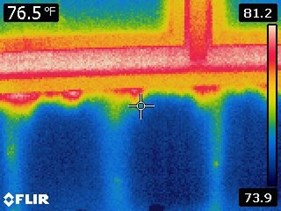 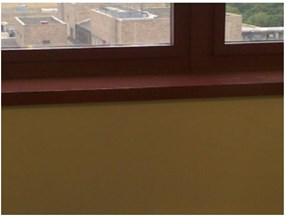 The images below show a 5 year old EPDM roof with a roof drain, adjacent brick wall and in the background a safety railing.  The thermal image indicates a more or less uniform temperature field, which is expected from the continuous EPDM material.  If EPDM has become saturated with water, then compromised areas would have retained more heat after sunset as the roof cools and then would show up as ‘hot spots’, which eventually would be sources of leaks as the material continues to deteriorate over time.  Because EPDM is a highly reflective material, ‘reflected temperatures’ are visible from the adjacent wall (green colors and light blue roof at left) and even the open door in the far left background (white rectangle and its reflection below).  Here infrared heat from the surroundings is reflected off the roof giving false temperatures that require a different camera angle to avoid the reflection.  The horizontal dark blue line is an expansion joint and appears colder because the material is facing the camera at a different angle and a closer look was needed to evaluate the expansion joint.  Darker spots on a roof are often where water is resting and is colder due to evaporation. 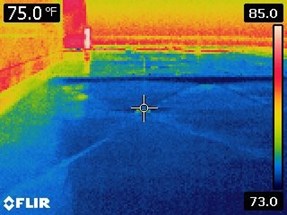 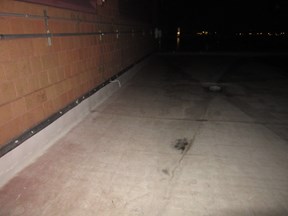 Infrared camera surveys are an important customer service that Heery can provide to clients and can be used for evaluation of other concerns such as worn insulation in electrical wires, panel connections, and motor windings, deterioration of solar panels, water leakage or blockages in pipes, and air leakage from ducts, among other.  All of these concerns pose either additional costs to the Owner or in the case of electricity safety can be at stake.

*An infrared camera views images of surface temperatures by measuring the emittance of infrared radiation.  All surfaces emit heat at various wave lengths of radiation, and the majority of this energy lies in the infrared spectrum, which are the frequencies just below the visible light spectrum of radiation and closest to the color red, yet not visible to the eye.  The camera the measures infrared radiation, calculates surface temperatures, and colors a digital camera image (pixel by pixel) to map out the temperature of the surface.