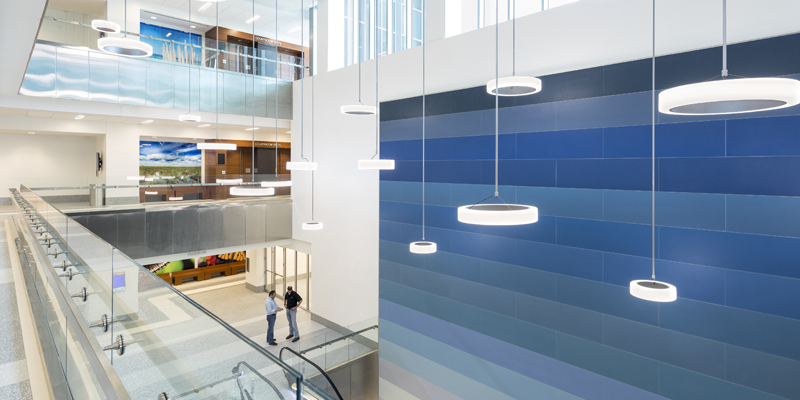 A design that creates a timeless civic landmark that reflects the importance of the justice system while bolstering the court’s need for security.

Being the second largest County in Florida, the 1.6 million county population needed a judicial system that was larger and equipped with the latest technology to best serve their needs. The new Broward County Judicial Complex was the steadfast resolution to the county’s concerns.

The new 20-story courthouse occupies a 1.55-acre portion of an existing 18-acre justice campus and is one of the few courthouses in the U.S. to include all courts (civil, magistrate, domestic relations, juvenile dependency and delinquency, criminal, domestic violence, and probate), as well as complete Clerk of Court functions, in one building. Other support spaces include Court Administration, State Attorney and Sheriff’s Department. 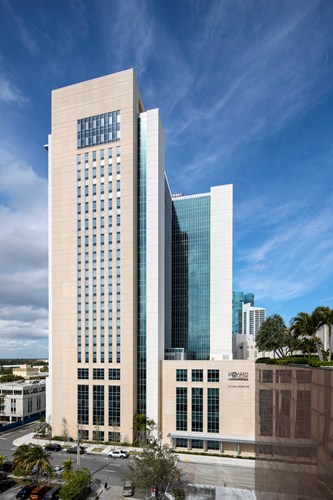 To accommodate the varied mix of court types, Heery’s design team arranged the central holding area to segregate detainee classifications efficiently.  The litigation spaces are specifically designed to meet the unique needs of each court department and include a mixture of 500 to 700 square foot hearing rooms along with courtrooms ranging in size from 1,000 to 2,200 square feet. Pairs of courtrooms share holding cells behind the courtrooms in lieu of between, allowing for a very efficient six-court per floor arrangement. Chambers are located adjacent to the courtrooms, providing efficient, private circulation for the judges.

The design approach was to create a timeless, civic facility that would reflect the importance of the justice system, while bolstering the court system’s need for security, flexibility, system redundancy, sustainability and hurricane resistance. The use of elegant, yet durable materials, is central to the theme of creating a new dignified image for the downtown core.

The judicial atmosphere of today’s courts requires facilities to accommodate the latest innovations in high technology. In Broward County, each different type of court runs on its own database system. A requirement of the design was to substantiate the court’s telecommunications and IT departments ability to support the court docket, which itself is maintained electronically. 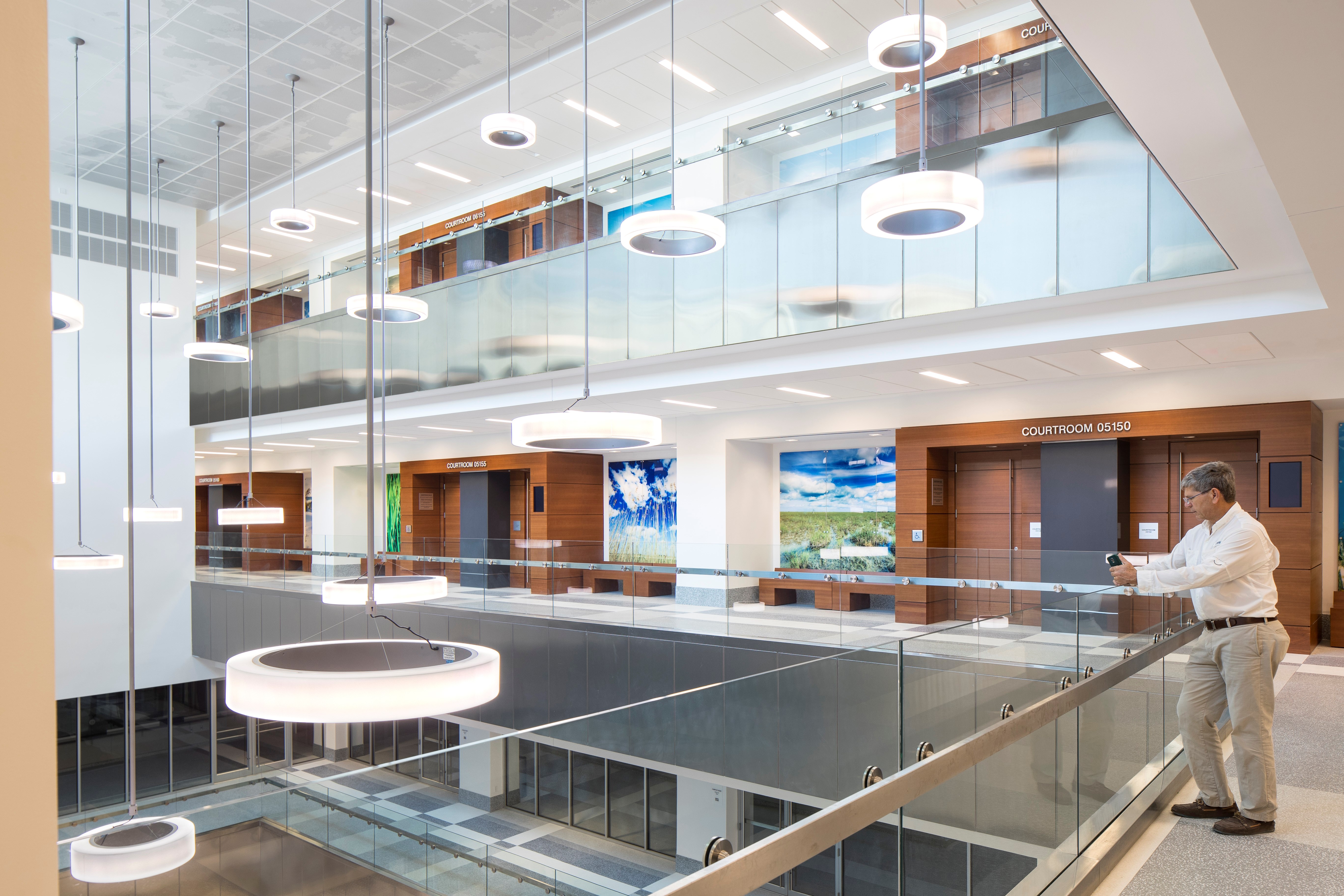 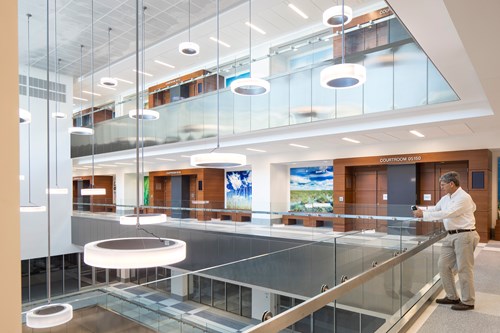 County workforces surge and contract over time, therefore the new courts tower was designed to accommodate these changes. Approximately 33,500 square feet of shell space is included in the tower and can be retrofitted for offices or additional litigant spaces as needed.

On the sustainable design, one particular challenge in creating a LEED facility was involving the corresponding need for the court’s tower to be hurricane resistant. LEED encourages extensive use of windows and natural light—the very things that become obstacles to withstanding gale-force winds and flying debris.  The team used glass wherever possible, putting daylight into areas where the most people would spend most of their time, such as the administrative and State’s Attorney’s offices.  Conference rooms are also distinguished by extensive use of glass. In addition to the glass, the team was able to identify enough LEED points by specifying highly efficient mechanical systems, native plants and locally-sourced materials to target LEED Gold certification.

Courthouse security was another major planning consideration for every aspect of the facility.  To begin, the project also includes secure parking for 120 judges and department heads, who can then take a secure bridge that connects them to the entire courts complex.  On top of that bridge is another for the general public, which allows those in the courts complex to move from building to building via the bridge system and only have to go through security screening once.  Prisoners have their own bridges and secure elevators that are used to move them from the adjacent county jail to holding cells and eventually to the courtrooms for their cases. 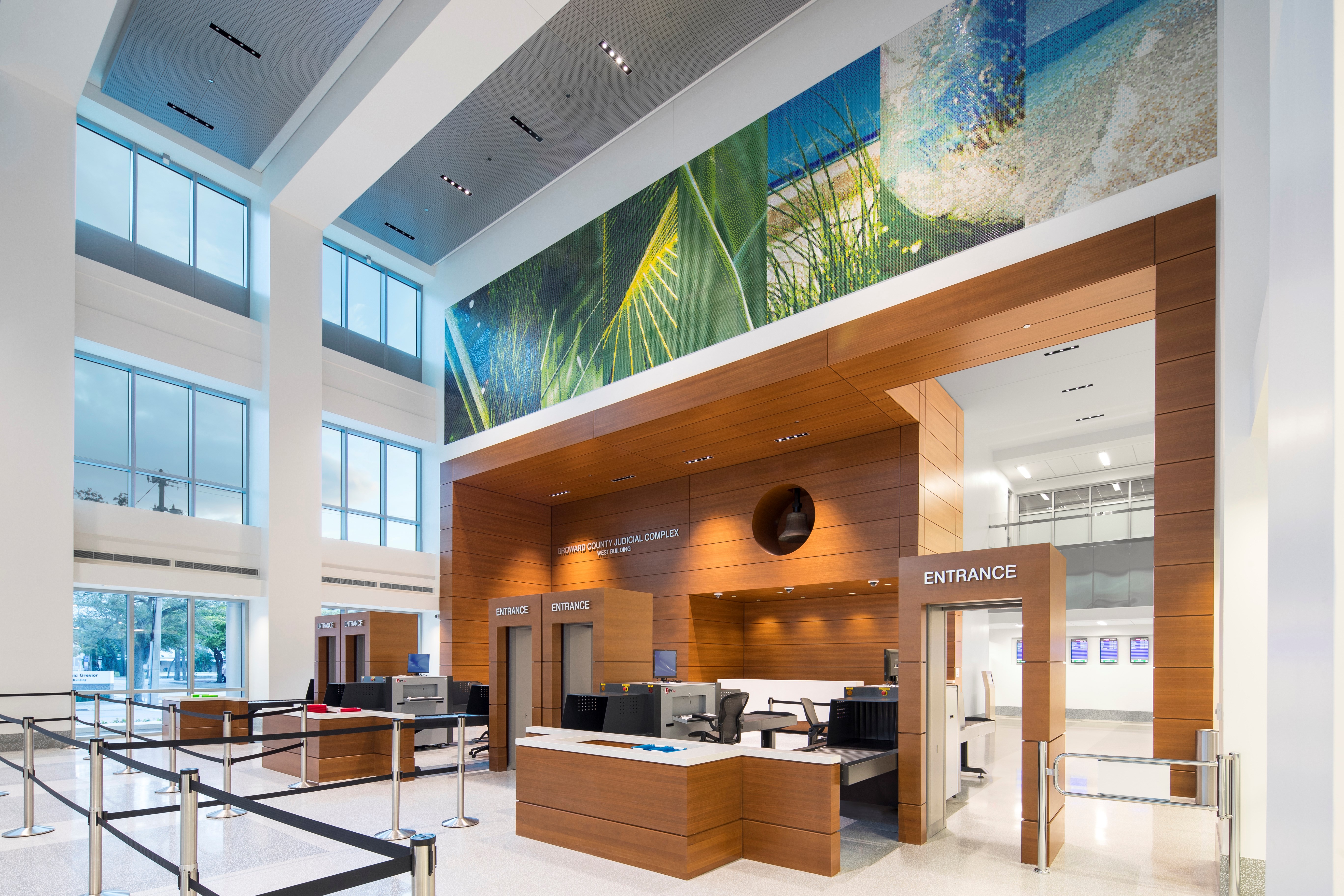 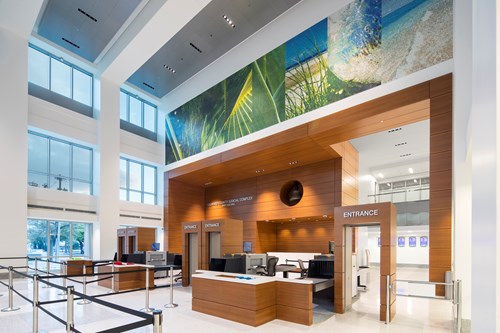 Even within the new facility, security has been taken into account.  The Clerk of the Courts areas all feature secure glass between the courts employees and the general public for handling transactions.  Within the domestic and family courts, separate waiting areas were designed to allow children or spouses to remain sequestered from others in their families, should that be required, while awaiting their court proceedings.

Phase 1 of the $190 million project was completed December 2016 with a total square footage of 741,000. “Completion of the new courthouse tower is both exciting and rewarding as it is a culmination of more than a decade of design effort by Heery and its partners,” says Corey Miller, the Heery Project Manager.  Master planning for the project started in 2005 and the building design began in 2010.