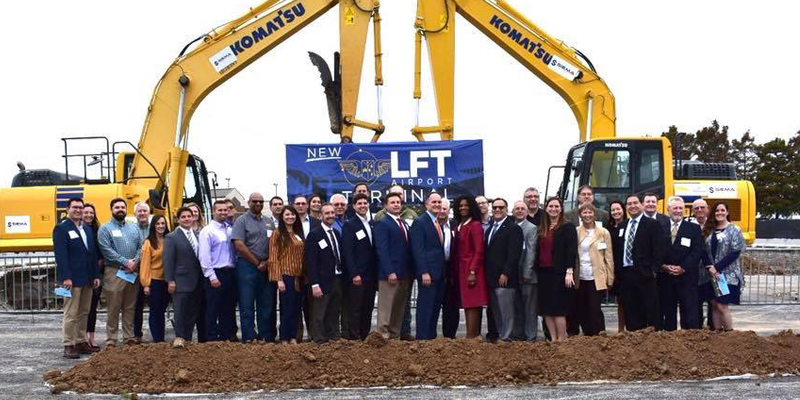 From its humble beginning as a wooden hangar, Lafayette Regional Airport (LFT) has grown into a state-of-the art facility, providing quality service to area travelers and businesses. Located 35 miles from the Gulf Coast, midway between Houston, Texas and New Orleans, Lafayette Regional Airport (LFT) is the area’s connection to major domestic destinations with connecting service to points around the globe.

Lafayette Municipal Airport, located in Lafayette, Louisiana, was dedicated on November 29, 1930 and a few years later during World War II, was commandeered by United States Army Air Forces. Eastern Airlines began the first commercial air service from the airport in 1948, and in 1953, its size has increased from 848.5 acres in 1953 to approximately 1,116 acres at present.

November 8, 2018 was an historic day as the Lafayette Airport Commission, local and state officials including Governor John Bell Edwards, CBRE | Heery and the entire project team gathered to celebrate the groundbreaking of the airport’s new terminal, a $90 million, 110,000 square foot project.

LFT is the fourth largest airport in the state and works out of the smallest square footage. The number of passengers being serviced per year has grown to over half a million and expected to increase 40% by 2025. A Terminal Area Study was completed in early 2013 identified the need for a complete Terminal Program, including a new terminal facility with supporting infrastructure, as well as additional safety, capacity, security, and noise projects for airfield and landside sustainability. In 2015, LFT announced its updated airport Master Plan to include a new passenger terminal.

Development of the new terminal is moving at an exceptional pace with CBRE | Heery overseeing the project on behalf of the Lafayette Airport Commission. The project garnered support from Lafayette residents who look forward to the enhanced efficiency and capacity for travelers as well as the economic impact it will have on the region.