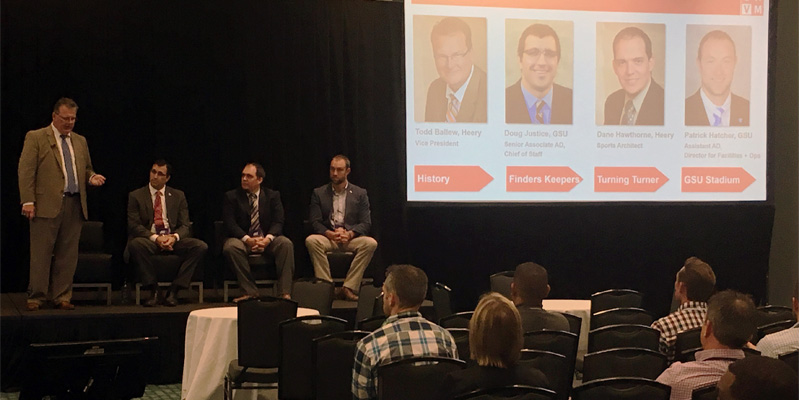 The International Association of Venue Managers (IAVM) held its 92nd annual VenueConnect Conference and Trade Show at the Music City Center in Nashville, TN on August 7. The week-long conference hosts professionals from a gamut of public assembly venues including arenas, convention centers, stadium and universities. Throughout the event, experts and industry leaders present on topics that range from venue-specific operations to reducing expenses while increasing revenues.

The audience, which consisted of senior managers and operations leaders from a variety of venues world-wide, listened as the project team spoke on the adaptive re-use and repurposing of the original Turner Field for its third evolution as an alternative to creating venues that are replaced and demolished on a new trend of a 20-year cycle.  Dane and Todd discussed Heery’s participation as part of the Olympic Organizing Committee through the adaptation post-games for the MLB Park.  Georgia State outlined the addition of football, the challenges of playing in the Georgia Dome and the value associated with their ability to acquire the Turner Field campus.

Findings from the Feasibility Study were shared, where Dane, the project’s lead designer, explained the rationale and outcome of the feasibility study specifically as it relates to the redesign’s return on investment and the enhancement of the fan and athlete experience. Georgia State followed that with a summary on Phase 1 of the stadium conversion and provided additional concepts to continue repurposing the facility moving forward. 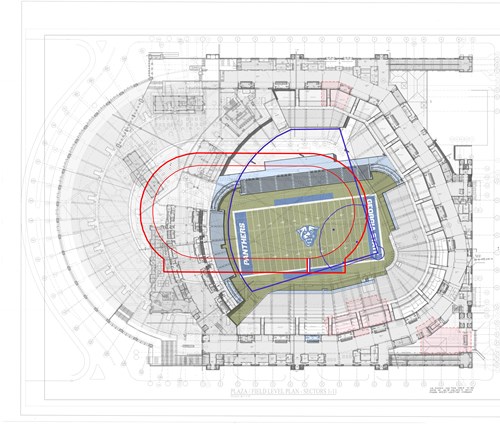 Field lines from the stadium's first use as the 1996 Olympics track and field, Brave's baseball diamond and the new GSU Panthers football field.

In an age where the facility arms race continues as a key element to attract recruits and staff, Georgia State Stadium is proof that creative thinking and design can transform an existing building into a viable new facility. Upon the conclusion of the presentation, a series of images and plan overlays pulled the audience into the stadium’s long journey from its first use as the site for the opening ceremony and track and field competition at the 1996 Olympics, its 20-year run as the home for the Atlanta Braves to its present state as the GSU Panthers’ very own home football field. Situated in the shadows of downtown Atlanta, the stadium will be a game-changer in raising the University’s athletic profile.

Dane Hawthorne is a Sports Architect at Heery responsible for design, production, and development of athletic facility projects. He is involved in all phases of the design and construction process and has in-depth experience in facilitating design from abstract concepts to construction documentation. Dane is leading the redevelopment and repurposing of Turner Field into GSU Stadium where he has been involved from the initial feasibility studies through implementation of Phase 1. To ensure that the design achieves the project goals, Dane has immersed himself in the culture and identity of Panthers Athletics.

With a strong background in the operations and management of sporting events and large spectator gatherings, Heery Vice President of Sports Todd Ballew assumed the role of Operations Analyst for Georgia State’s redevelopment of Turner Field, working closely with the user group and design team to ensure functional efficiency. Todd blends his experience in event management and project responsibility from the “client-side” with experience from the “provider-side” to afford both client and staff with a true understanding of sport facility goals.