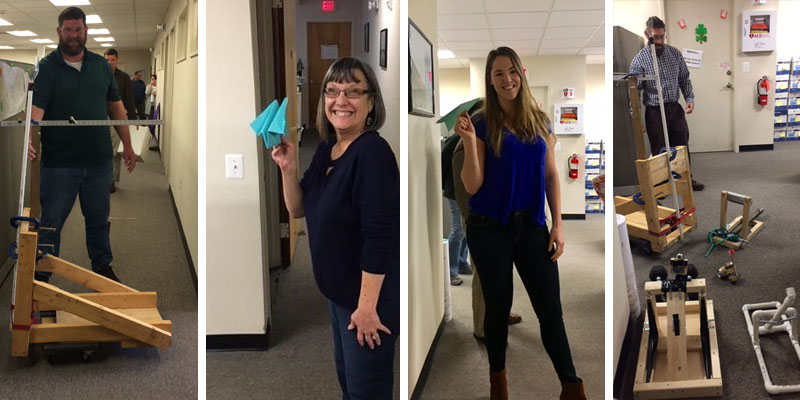 INSIDE HEERY
FEB
2017
“Scientist dream about doing great things. Engineers do them.” - James A. Michener

This year National Engineer’s Week was February 19-25, the very week the Heery Landover office holds its annual competition, the Paper Airplane Contest. On Monday, February 20, Heery employees competed to make an airplane using the approved paper and could only add an extra $1 worth of materials. Area Manager Skip Parks took home the first-place prize with a fantastic airplane that flew down the entire hallway, beating out all other paper planes by a landslide. Skip later admitted his father was a navy pilot that taught him how to make different paper airplanes when he was a kid. Project Manager Chuck Bostek took home second place with a plane crafted by rolling ten copper pennies together with a miniature cutout of a plane on top.  His substitute thrower, Project Manager Beverly Ingram, had quite an arm as she chucked the plane as far as she could.  The office had great participation from engineers and not, making it a lively and fun event that all could enjoy and engage in.

The week ended with the all encapsulating Catapult Contest. Homemade catapults were constructed that were required to fit in a 4 X 4 square with a height no taller than 64” that launched a cork at its required target. Bostek’s catapult proved the theory that bigger is better with his catapult coming in at 63.5” - just under the height maximum.  The most creative award went to Assistant Project Manager Mike Stroud, for his catapult included the simplest of items: two cans, some tape and a plastic spoon.

Engineering week went off a hitch this year and the Landover office is already gearing up for next year’s competition of who can build the best… wait for it… mouse trap!

Heery Atlanta Participates in Georgia Walk for Wishes
Expansion of Mt. San Rafael Hospital Begins
The Kalen Center: Giving Children a Chance
A Testament to the Importance of CPR Training and a Focus on Safety
Rising Stars: Janelle Kolisch, from crayons to commissioning