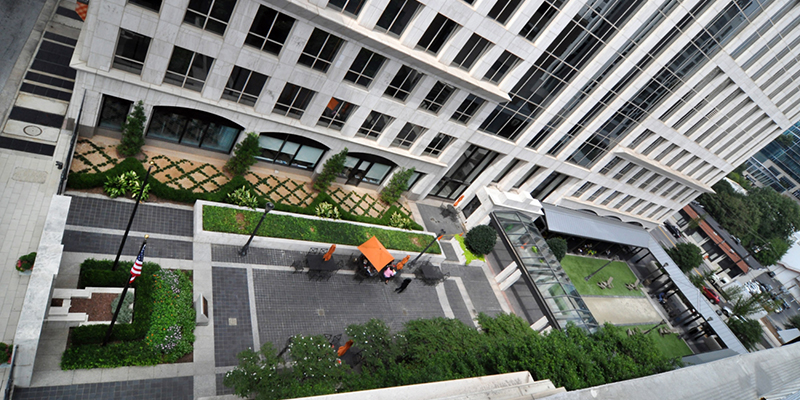 Of all the car ads that I've seen in print, on television and online, there isn't one in a setting that even slightly resembles my commute. They are mostly shown in an open expanse with few other cars nearby or on a closed track that carries the small notation, "Professional driver on a closed course. Do not attempt."

If the experiences created through architecture and urban planning were frequently marketed as a consumer product to mass audiences then one would easily see the parallels with car commercials’ fantasy versus reality. How a building meets the ground and context is as important as its overall design expression. What does a walk outside the building where you work feel like? In the built environment’s struggle between cars and pedestrians, roads have largely prevailed.

On the way into work this morning I encountered two seemingly different things that captured my attention. The first was a news story on the radio about the surge in public discussion about proposed parks being built over highways, hiding the reality of city driving below the surface. The other thing I encountered this morning was a film crew creating picturesque, walkable streets for a television production with the help of Atlanta Police restricting traffic.

A street is primarily enjoyable to a driver if traffic conditions allow for reasonable movement. For pedestrians, a street is primarily enjoyable if the surroundings have some redeeming value like views, trees, thoughtful urban design patterns, green space, shops, and well-designed architecture, among other elements. Those things can be appreciated by drivers, too, but if traffic isn’t moving the likelihood of it being a pleasant experience decreases.

Cities need transportation and cars will be a part of cities as long as energy allows it. Several successful mixed-use developments have designed the flow of cars through the central avenues to be slow and steady while also carefully hiding the parked cars from view by wrapping parking structures around the back edges of the development. About thirty years ago, I became fascinated with how a development in my hometown replaced a failing mall and created an experience that both drivers and pedestrians (shoppers) enjoyed. This integrated approach works at slow driving speeds but for highways the two must be separated.

Good planning, design and engineering can solve a lot of problems with modern cities and I’m excited at the possibility of how more development-above-transportation solutions might transform cities by applying the mixed-use concept to stack public spaces and public rights-of-way.